"Young-gu and Daengchili" is 1989 children's comedy film, which is directed by Ginam Nam. Ginam Nam is known as something like "the fastest film shooter in the world". Because he made very cheap movie, within extremely short time. He has his record of making a commercially released feature-length martial arts movie, which even has location filming in America, within just one week. And this movie, "Young-gu and Daengchili" is the most successful film of hundreds of his movies. 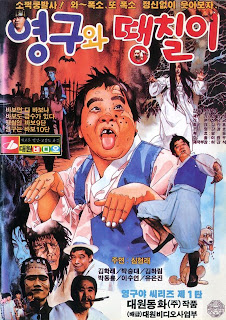 Story of this film is similar to an interesting Hollywood movie, called "Monster Squad". That is a bunch of town kids fighting against all of the famous monsters and ghosts from old horror films. In this "Young-gu and Daengchili", the main kid called "Young-gu" and his friends fight against Dracula, Frankenstein's monster, and Werewolf. Also there are some oriental monsters including Chinese hopping zombie and Korean traditional virgin ghost. It is interesting idea for the plot and this movie introduces this story with hilariously cheap jokes. These jokes are not very funny but very very hilarious, which are not boring at all.

On the other hand, this film is very important movie as a notable example of Comedian movies of late 80s and early 90s. Back in 80s and 90s, there were many cheap feature-length comedy movies based on successful comedy TV shows. They usually reused the characters from the TV shows, and casted the main comedian from the TV show. These movies should have been cheap and quick. So film makers targeted children as their audience, and they adjusted its style as stupid as possible, because lazy stupidity jokes were the easiest ones to make. They could trick the children to believe that they were watching really funny jokes, even if they were not that funny but just purely stupid.

"Young-gu" in this movie is, of course, based on the successful TV show. It is parody comedy of the other serious TV show called "Way of Woman". It was originally the tragic story between a mysterious wife and a stupid husband during the time of World War II and Korean War. But the parody comedy focused on the stupidity of the husband.

This movie, "Young-gu and Daengchili", is purely made of stupid part of the "Young-gu" character. This "Daengchili" is just the name of the dog. The film makers of this movie erased all the other stories related to the  mysterious wife and Korean War. Instead of them, they just put the story that could entertain children. They put some stories borrowed from the good children's films like Monster Squad. And they casted famous popular Comedian, Hyungrae Shim, who was the single most popular comedian of the late 80s, and who played Young-gu in TV comedy show. 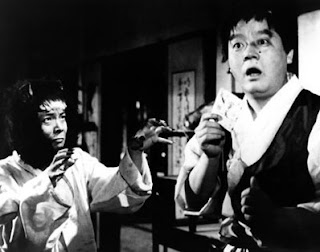 This movie has not original but many interesting ideas from all the other sources. And hilarious factors are insane enough. For example, this movie begins with some sort of an interactive scene. A narrator of the movie tells to the children to say out loud the name, "Young-gu". What happens if children shouts? Recorded narration voice once again tells to the children to shout out in the louder voice. It is very primitive and cheap, but actually good way to add some entertainment value with relatively low cost.

The bad aspect is the unexpected huge success of this film resulted endless sequels and rip-offs of this film, all along the 90s. Most of them were just bad, and too cheap without any small quantity of decency. This makes Korean movie makers to think all the Children films to be cheap, bad and senseless, even for today.This is not a good way to treat young audience. There is no honor at all. 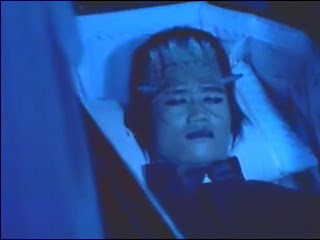 One more thing. "Young-gu" in this film becomes a symbolic character of comedian Hyungrae Shim. This makes him to build his own film studio called "Young-gu Art Movie". He has produced and directed many hilarious movies in his film studio. Some of his films have been released in America and Japan. For example, "The Reptilian", "D-War" and of course, a 2010 film, "The Last Godfather" which contains its main character, "Young-gu" once again.
Posted by J. Kwak at 1:07 AM